Between the months of May and June, the whole city of La Paz stops to celebrate one of Bolivia’s most extravagant and unique festivals.

Translated as “Festival of the Great Power”, Fiesta del Gran Poder is a religious celebration paying homage to El Señor del Gran Poder or Jesus Christ. The dramatic festival features thousands of dancers parading down the sprawling streets of La Paz, flaunting their colourful costumes while thousands of spectators cheer in delight.

Although the Fiesta del Gran Poder has changed over the years, many of the Aymaran traditions remain, making it a one-of-a-kind event enjoyed by locals and tourists alike. 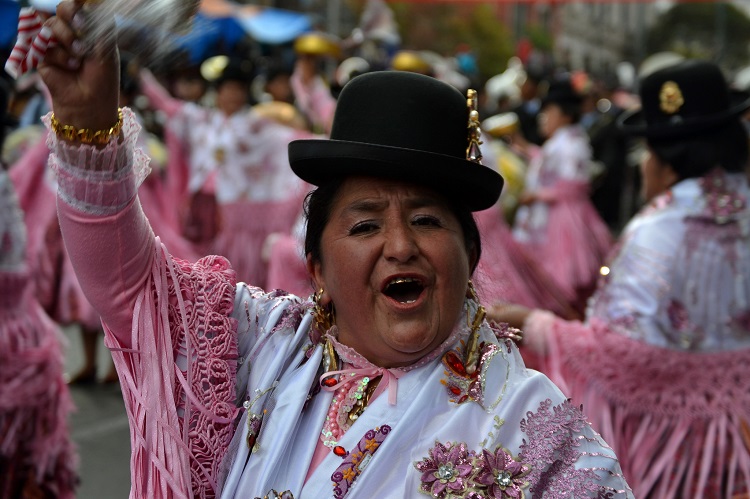 In the early 17th Century, an anonymous painting was donated to the city of La Paz by Genoveva Carrión, a young nun and newcomer to the Monasterio de la Purísima Concepción.

What made this painting so controversial was that despite the banning of human representation of the Holy Trinity by the Catholic Church, the artist used mestizo features to characterise the Father, the Son (Jesus Christ), and the Holy Spirit in his work.

Over the decades, the painting fell into many different hands, finally ending up with Plácido López who lived in the barrio Chijini in La Paz. During this time the painting’s second figure, Christ the All Powerful, grew a reputation for granting miracles, insuring the faith of the Andean locals and helping to merge pre-Colombian religion with the Roman Catholic Faith.

In 1928 began the construction of a temple in Ch’ijini, today Gallardo Street, which was completed in the late ’30s. The controversial painting was housed in the temple enabling locals form different areas of La Paz to worship the Gran Poder in the hope of receiving blessings and miracles.

From the unwavering devotion of the locals grew the traditional folkloric festival, paying homage to the Gran Poder Jesus Christ.

Starting in the 1930s, the fiesta was a simple candlelit procession performed among Aymara migrants living and working in the market district around Avenida Bueno Aires. By 1952 a departmental dance festival was established and over the years evolved into a major international street festival, famed for its exuberant parties, elaborate costumes, and enormous crowds.

The prosperity of Fiesta del Gran Poder can be attributed both to the growing influence of the Aymara people as well as the acceptance of the Aymara culture among La Paz’s non-indigenous population. Paceños of all classes are represented in the parade and festivities are enjoyed by people from all parts of the world. 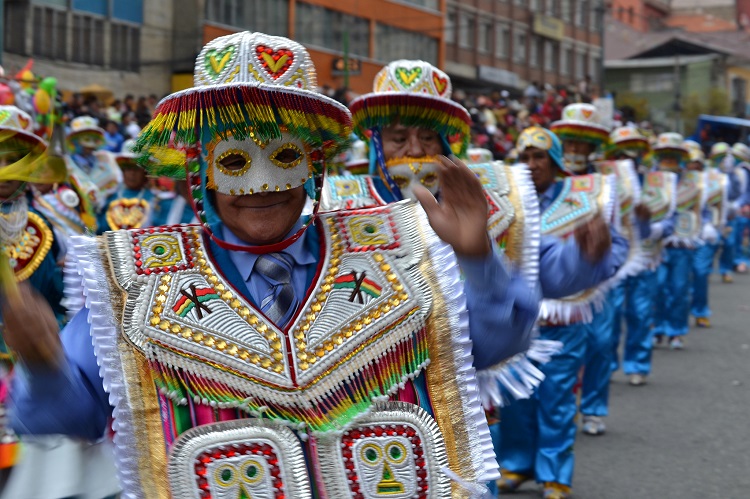 Every year, more than 30,000 dancers representing La Paz’s neighborhoods and folkloric groups, dance along a 6 kilometer route through the city’s streets. showcasing the rich and diverse Bolivian culture. 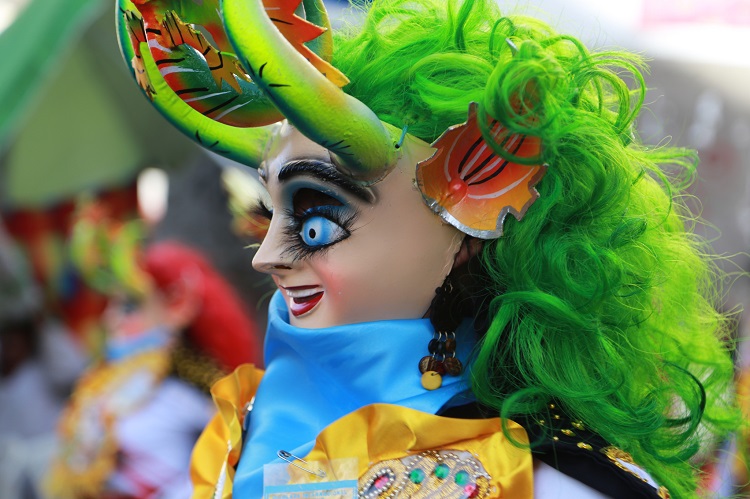 When it comes to the festival, no expense is spared. Galvanized by their faith and gratitude, each performer believes their monetary waste will be compensated by the Gran Poder, who will return everything that they give him at the time. Costumes are unique to each dance and range in price from 500 Bs ($70 US) to 1000 Bs ($140 US), depending on what the dancer wants.

Weighing in at around 25 kg each, it comes as no surprise that the bejeweled costumes are quite a challenge to dance in. However the dancers believe that if they perform for 3 years, their wishes will be granted by the miraculous image of Christ.

As voted the best way to travel around Bolivia and Peru, we highly recommend choosing Bolivia Hop as your means of transport. Having local guides on board gives travelers a unique insiders experience of Bolivia! 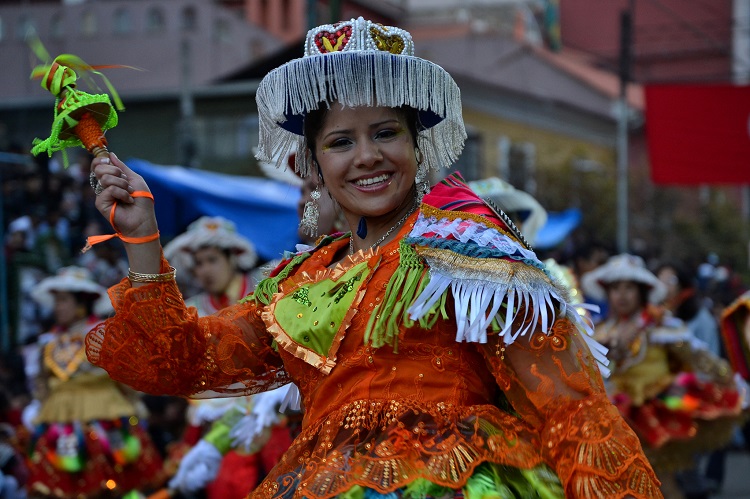 Iconic dances honouring the Jesus del Gran Poder include the Diablada (Devil’s Dance), the Morenada (Dance of the Black Slave) and the Waca Takhoris (Dancing Bulls). Each of the 65 dance groups are preceeded and followed by marching bands enthusiastically performing authentic Bolivian tunes throughout the streets.

To enable the dancers to perform freely and safely, many of La Paz’s roads are blocked off and lined with seating for spectators. Street vendors sprawl the entire parade route, selling everything from food and clothing to toys and tools.

In the three days leading up to the festival, several parties take place throughout the community involving masses, music, drinks and feasts all honouring Jesus del Gran Poder. The main focus throughout each of the parties is the preste; traditionally a person of prestige in the community who pays for the entire party.

The Ch’alla is a ritual performed to Pachamama (mother earth) for the crops and fruits she has provided throughout the year. During the ritual, community members prepare offerings, pouring beverages on the floor as symbol of providing for the earth.

The Convite and the Promise

The last stage is the Promise, a religious anniversary which takes place on the same day of the Fiesta del Gran Poder where members of the community ask favours, promising to be involved in the festival as dancers or prestes. The burning of the ceremonial table is performed as an offering to ensure the safety and health of the festival’s participants in present and in future days. 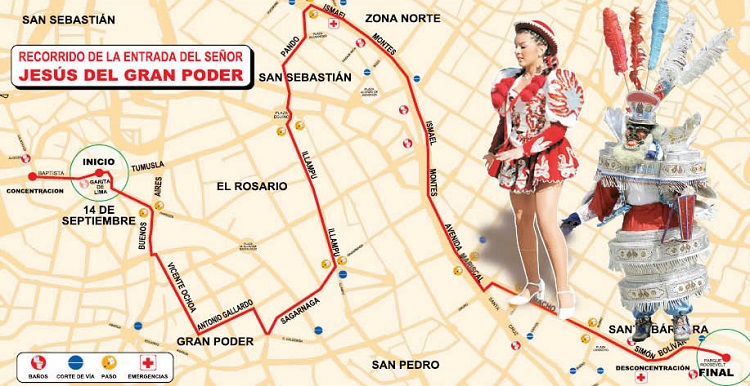 The parade begins at 8am at Ben Hur park, located on Calle Juan Granier, one block from the Garita de Lima square and near the General Cemetery. The dancers then continue down Antonio Quijarro street, Max Paredes, Buenos Aires, and make they’re way down to Pedro de la Gasca.

The parade lasts around 12 hours with partying continuing well into the night. 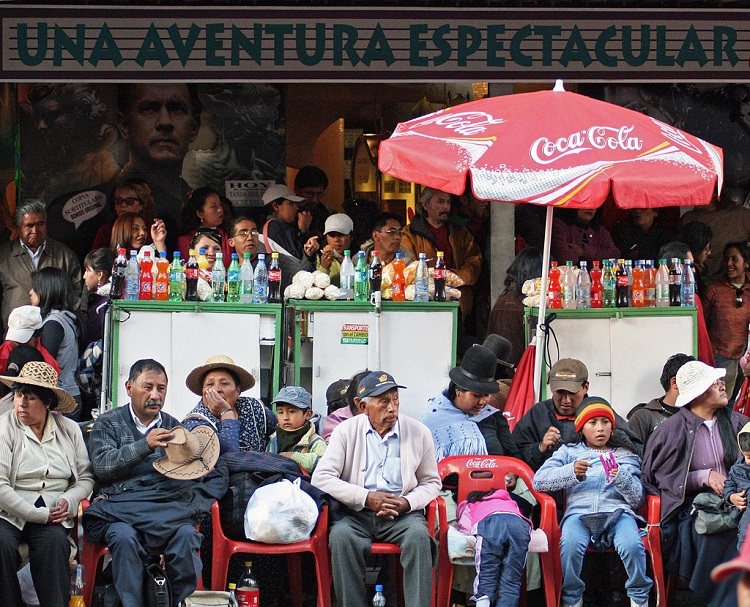 Have you been to ;Fiesta del Gran Poder? Share your experience in the comments below: 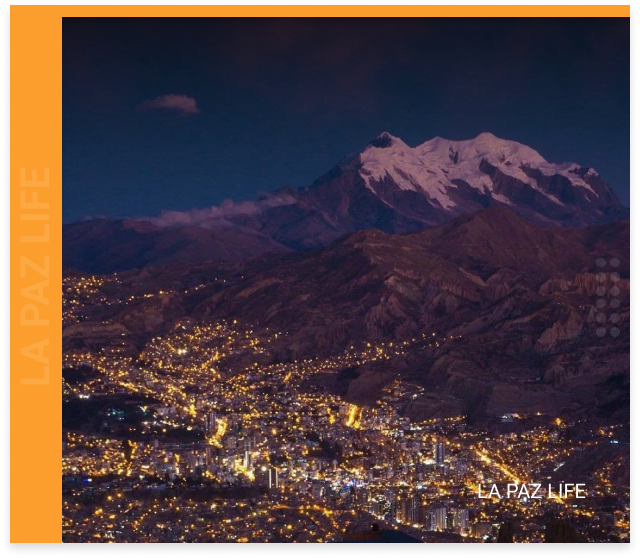