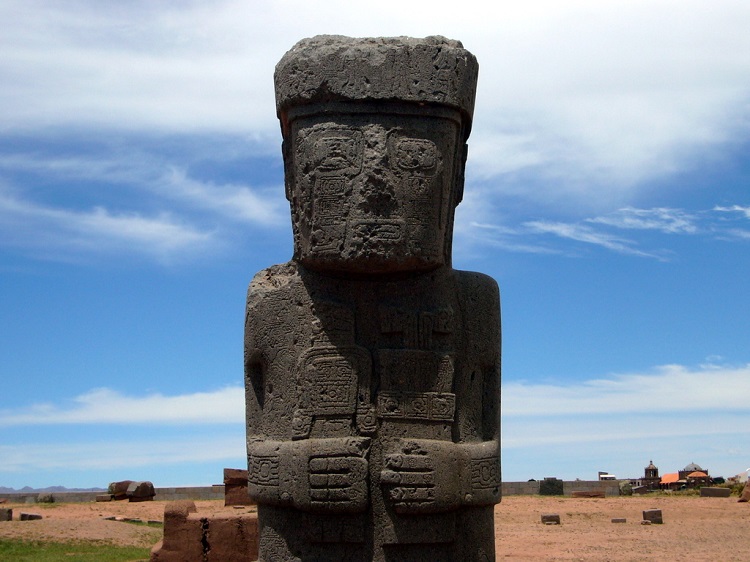 Listed as a UNESCO World Heritage Site in 2000, Tiwanaku is an ancient archaeological site named after one of the most important civilizations prior to the Inca Empire.

Located 72 km (44 miles) west of La Paz, near the south-eastern shore of Lake Titicaca, lie the ruins of one of the oldest and highest urban cities ever built.

For approximately five hundred years, the Tiwanaku empire grew from a small settlement focused on growing crops and other products not available on the Altiplano, into a thriving ritual and administrative capital of a major political state.

Tiwanaku’s location between Lake Titicaca and the dry highlands provided a great environment for agricultural farming, making it a desirable base for the Tiwanaku. The ancient people developed expanded farming and agricultural techniques, invaluable to their civilization’s growth.

Around AD 400, a state in the Titicaca basin began to develop and an urban city was built at Tiwanaku. By AD 500, Tiwanaku was the primary political power in the Titicaca Basin entering into its most powerful phase in the 8th century AD.

Along with being the main headquarters of a powerful empire, Tiwanaku was also the sacred center of the Andean region. Many people made the pilgrimage to the sacred site, to worship and praise the Gods.

Between AD 600 and 800, the Tiwanaku community continued to grow and is estimated to have supported a population of 20,000 inhabitants at its height. Through their growth, the Tiwanaku were able to extend their culture and political prowess into surrounding regions, spreading from northern Argentina and Chile through Bolivia to the south of Peru, making them the most important regional power in the southern Andes.

Tiwanaku’s demise is believed to have begun around AD 950 when a substantial shift in climate occurred. In the Titicaca Basin, a drought was brought on by a significant drop in precipitation causing agricultural production, the empire’s source of power and authority, to dry up.

People in the region eventually fled to different areas in the Altiplano or died and Tiwanaku completely disappeared around AD 1000. 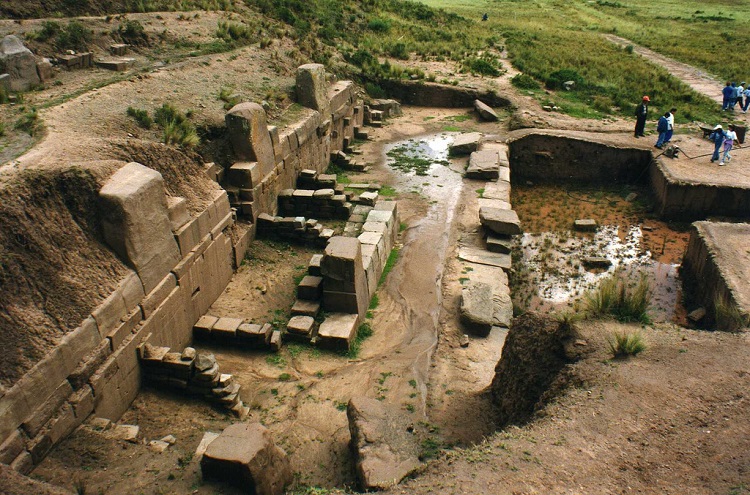 Abandoned for nearly 1,000 years, Tiwanaku was re-discovered in 1549 by Spanish conquistador, Pedro Cieza de León, who stumbled upon the remains while searching for the Inca capital, Qullasuyu.

According to historical accounts, Indians of the Tiwanaku region told the first Spaniards that the ruins were either raised by giants or that they were the remains of an agnostic population whom Deity had converted into stone because they had refused to house his messenger. 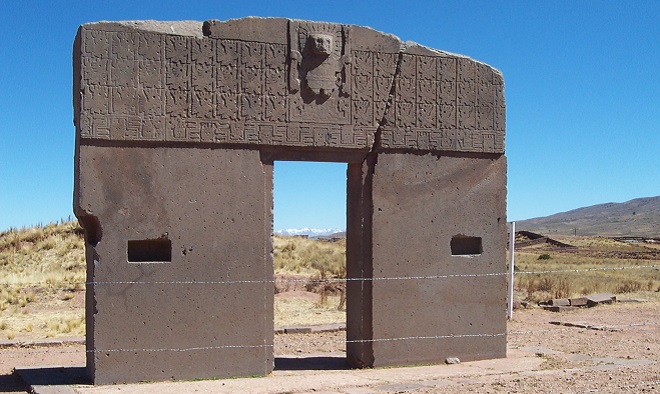 Today, Tiwanaku remains an enigma, shrouded in mysteries of how, when, and by whom it was constructed.

Much of Tiwanaku’s stone creations defy explanation, posing more questions to archaeologists than answers. For example, the site is strewn with enormous blocks of stone weighing up to 25 tons that no known pre-Colombian culture had the technology to transport.

Over 28 centuries, the Tiwanakus created some of the most impressive stone monoliths in the world, engineered an ingenious irrigation system and gained advanced understanding of astronomy and the workings of the sun. The fascinating civilization was truly advanced beyond their years.

What to see at Tiwanaku 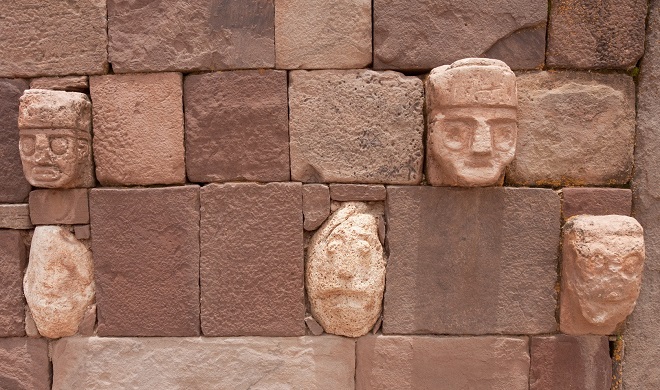 The ruins of Tiwanaku are made up of impressive architectural structures such as palaces, temples and pyramids, as well as giant monoliths and figurative representations.

Though the site of Tiwanaku is still not fully excavated, what is there is remarkable. Structures available for public viewing include:

There is also a decent, albeit small indoor museum, which provides a good framework for understanding the ruins and the pre-Columbian civiliazation.

A good understanding of the history behind the site and civilization is needed to understand what makes Tiwanaku special. Therefore, in order to get most out of your time at the site, it is recommended to book a tour with an English speaking guide who can explain the history, culture and building techniques of the structures.

Getting To Tiwanaku By Bus 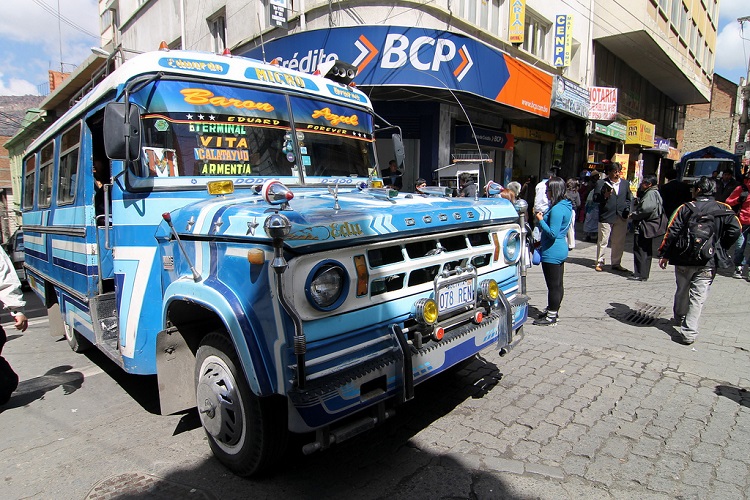 For travellers who would prefer to experience the ruins on their own, it is easy to get there via public transport:

From the city’s centre, take a taxi or mini bus to La Paz’s General Cemetery. Across the street in front of the cemetery’s main gate, there are florists and to the right of this area are minibuses headed to Tiwanaku. The buses will drop you right at the road leading into the ruins. The cost of the journey is about 15 Bs ($2 US) one way and takes around 90 minutes.

A pleasant stop-off point on the bus ride from La Paz to Tiwanaku is the little town of Laja. Due to its small size you only need about half an hour or so to wander around before jumping back on the next bus to Tiwanaku.

For those wanting to travel onto Copacabana after visiting Tiwanaku you will first need to take a bus back to the cemetery as there are no direct roads between the two places. From the cemetery there are buses and micro-buses leaving every 30 minutes between 6am and 6pm. The trip to Copacabana takes around 3.5 hours (including a ferry crossing) and costs around 35 Bs ($5 US) one way.

The easiest and most economical way to visit Tiwanaku from Copacabana is to first make your way to La Paz, then catch a bus to the ruins as explained above.

Tourist buses from Copacabana to La Paz leave at 1.30pm and 6.30pm daily costing 15 Bs ($2 US). Local buses leave every hour from around 7am, however can be unreliable.

The other option is to hire a a private driver for the day to drive you between Copacabana and Tiwanaku, returning to Copacabana in time to catch one of the buses back to La Paz.

For those spending the whole day at Tiwanaku, there are a couple of reasonably priced restaurants located near the museum where you can have a bite to eat. If you’re just after a drink, there are usually people walking around selling water and other beverages.

One of the biggest events in the Bolivian calendar is the Amayra New Year.

Every year, on June 21, people from all over the world flock to Tiwanaku to watch the rays of the rising sun shine through the temple entrance on the eastern side of the complex.

Locals celebrate the Amayran New Year by wearing colorful ceremonial clothing, drinking singani, chewing coca, sacrificing llamas and dancing until dawn. Tourists are welcome to join in the celebrations and can purchase local art from the artisan stalls set up to coincide with the event.

Special buses leave La Paz around 4am to arrive in time for sunrise. The more hardcore partiers can camp outside the ruins a few days before the event.

A statuette of Ekeko, the Andean god of abundance and prosperity, was taken from the site in 1858 by a Swiss diplomat. Dating from the 2nd century B.C., the stone statuette has been held in a museum in Bern since 1929. However, after a year of negotiations, it has now been returned to Bolivia, to be formally presented to the Bolivian people on 24th January 2015.

In 2010, UNESCO recommended that visitors be prohibited from climbing the pyramid Akapana, however, the suggestion has not been implemented. In 2014, due to lack of management and an unsupported holistic view of the ‘use’ of Tiwanaku, UNESCO has decided to add the archaeological site to their List of World Heritage in Danger.

Have you visited the ancient ruins of Tiwanaku? Share your experience in the comments below: